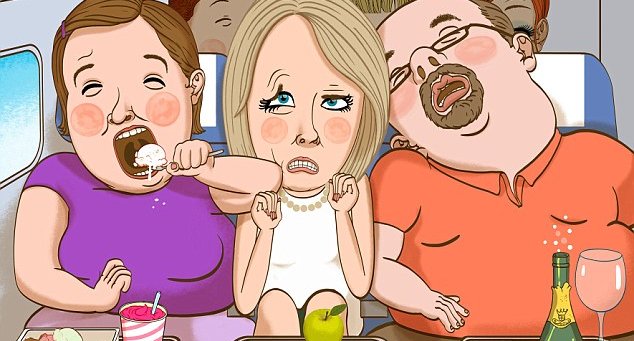 I’m aware this is more of an opinion piece but I reckon because we all travel widely now for work that it has relevance to my readers. I always work on a plane and it can be problematic with the following 8 Travel Types sharing the sky with you.

Being a serial economy traveller I thought I’d pass on a few reminders to some of our friends who may be Blissfully Unaware.

Everybody knows that the window gets a window and a wall, the middle gets two arm rests, the aisle gets an arm rest and some leg room. That’s the rule. It’s fair. No deviation. So what happens when the guy (and it’s always a guy, sorry boys) in the aisle deviates and decides to use two arm rests? Doesn’t he know?

You make little puffing noises and wriggle around trying to draw attention to your middle seat violation but Blissfully Unaware meathead has just got his big meaty arms attached to the arm rests and they’re going nowhere.

You try to sneak your elbow on, further back, but that doesn’t work. No one wants half an arm rest.

You know the ones. They bash you while you wait behind them to board but because backpacks have no feelings they don’t know – also joining the BU club. Then when you’re seated they stand in the aisle, swinging freely, bashing your head this way and that.

It’s Sydney to Melbourne people! Nobody needs to put their seat back on an hour flight. Suddenly your head is in my lap, my laptop is in my face and my hands want to be around your neck.

Just don’t. We have a new innovation now. It’s called the internet.

Talking. Chatting quietly to fellow passengers is a pleasant past time. But this is not Wrestlemania. Keep it down. Think church voice, not MCG voice.

And ladies, we have a special decibel that happens when two or more of us are talking, non stop, all at the same time which has an accelerating effect on nerves. The other 200 people get off the flight ready to kill someone.

Nice people who just want to chat and I’m often happy to do so, if I’m not working. But the other day after I had politely excused myself and put my earphones in, Mr Chatty physically took my earphones out so he could tell me something else he remembered. Violation!

I do get it. Tall people in economy – it must be a nightmare and there’s nowhere to put your knees except nicely into the small of my back. But the child who randomly kicks – well, I just want to hurt them badly.

Any other problems on a plane we can help people become aware of? Feel free to add in the comments.

Lynne Schinella is becoming an ornery middle aged woman who has been on way too many economy flights lately.

She is a conference speaker, speaker coach, and author of Bite Me! and other do’s and don’ts of dealing with our differences.